With over 100 years of experience in the fuel industry, we believe there is no question or problem that Portland cannot answer or help you solve. We want to hear your questions and issues with regards fuel buying, fuel quality, fuel consumption, petrol forecourts, grades of fuel, refining etc, etc, etc. The list really is endless and we would like you the fuel user to test us so we can help you!

Feel free to send us a question. We will publish it on this page along with the best answer we can give. Please indicate if you wish to remain anonymous and we will publish the question without your name.

Read our forum questions below:

April 5, 2011 A work colleague told me that America produces more Crude Oil than Saudi Arabia. Surely this cannot be correct?

Your colleague is correct – allow him / her an extra visit to the office biscuit tin. America does produce more oil than Saudi Arabia, but it is also uses more oil than Saudi by a huge factor. Therefore, the US not only produces huge amounts of oil for its own consumption, but also heaviliy relies on imports, most notably from Saudi Arablia. So Saudi Arablia is actually the biggest exporter of oil in the world, but not the biggest producer. Saudi’s large exports are in part a result of its huge reserves, but equally a function of its low population / low internal demand. So credit to your colleague, but perhaps you could snap the biscuit tin shut on his / her fingers with this fact; Russia is the biggest oil producer in the world and this is illustrated on the attached graph.

Also interesting to note on the graph is just how reliant China is on foreign imports of oil (far more reliant than the US) – they consume almost 10 times the amount of oil as they produce. 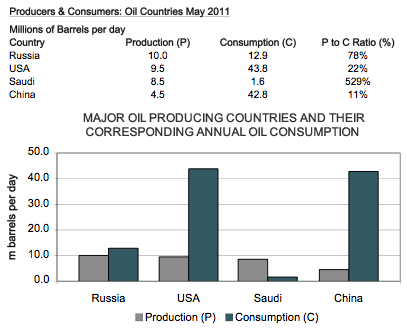 This question takes us back to the old science teacher question; “what is heavier – a tonne of lead or a tonne of feathers?”. The answer of course is that they are both the same weight. After all, a tonne is a tonne – it’s just you need a lot more feathers to make up a tonne than you do lead! So fuel is traded on the same basis, because all grades of fuel have differing weights (ie, density). For example, petrol is lighter than jet fuel, which in turn is lighter than diesel, which is lighter than bitumen and so on. So when a trader buys 10,000 tonnes of fuel he or she knows that they will receive a consistent weight of product, irrespective of how many litres makes up that tonnage.

In addition, there is another practical reason as to why oil is traded in tonnes and that is that liquids contract when they cool. So if a buyer in Sweden buys 10m litres of petrol from the south of France, loads it onto a ship and then sails it to the cooler climate of Stockholm, the product will have contracted by the time it arrives. Consequently, the buyer will receive less than the 10m litres purchased. However, if the buyer has bought the product in tonnes, 10,000 tonnes of petrol in the Mediterranean will still be 10,000 tonnes of petrol by the time it arrives in the Baltic, meaning that on paper at least, the buyer has not lost any of the volume purchased.

February 16, 2011 Why is there such a difference in price between Brent Crude and West Texas Intermediate (WTI)?

Technically speaking, Brent crude is able to produce greater amounts of diesel and jet fuel, which have greater world-wide demand than the petrol rich WTI. Nonetheless, both grades should show a similar price, as they are both used as markers for world crude prices. Increasingly though, WTI is becoming an indicator only of North American markets and in particular, the record high inventory position at Cushing Pipeline Terminal in Oklahoma.

The reasons for these high stock levels are myriad, but the sagging US economy, limited pipeline access out of Cushing and a wish by the US Petroleum Reserve to build strategic stock all play their part. Brent on the other hand, reflects booming oil demand outside of the US. In addition, physical supply is not limited by any landlocked oil terminal and the product index has been well marketed by London’s Petroleum Exchange, so that it really has no serious competitor on world oil markets.

A question from Douglas in Hackney

January 26, 2011 What is the difference between Gasoil (Red Diesel) and Diesel?

There is no major difference between Gasoil and Diesel. Indeed, this is the reason that red-dye is added to Gasoil by Customs & Excise (HMRC), to stop consumers using it in their normal Diesel cars. If caught using Red Diesel, drivers can face hefty fines and sometimes a custodial sentence – HMRC take these things very seriously.

From a technical spec, the only difference between Gasoil and Diesel is the sulphur content. Gasoil can contain up to 0.1% sulphur content, while Diesel can only contain 0.001% sulphur. As such, Gasoil has a lower production spec and costs circa 1ppl less than Diesel in the markets. However, it is only when you factor in the difference in Government tax (called fuel duty) for each grade, that the real difference in price can be seen. Gasoil duty is 11.33ppl, whilst Diesel is 58.95ppl. All in, a difference of circa 48ppl for the same product!

NB: The duty rates were correct at the time of answering but have subsequently changed on the 23rd March 2011 to 11.14ppl for Gasoil and 57.95ppl for Diesel.

A question from Robert Dale in Gateshead

January 20, 2011 Who is the devastatingly handsome Commercial Director and how can I meet him?

As you know Joe, the devastatingly handsome Commercial Director is you and I suggest you get back to work and / or the sunbed.

Joe from York sent this from his Blackberry

January 7, 2011 How much petrol and diesel is sold through those 9,000 petrol stations every year?